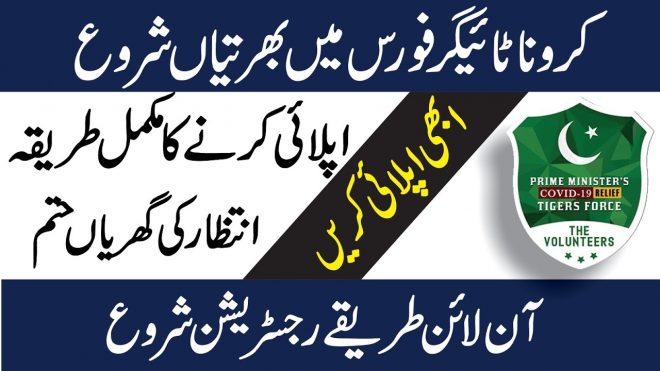 The ministry said that the registration portal will be launched tonight on the orders of the Prime Minister and will be open till April 10.

The ministry also revealed that young senators will also register themselves in the portal. It added that when this government is formed, it will be above political lines’Corona Relief Tiger Force’.

The ministry also announced that the force would be fully operational under lockdown or emergency. It added that youths will be trained to provide groceries to families in need.’Corona Relief Tiger Force’

Prime Minister @ImranKhanPTI announced the PM Corona relief fund. Also encouraged all Pakistanis, inland and overseas, to donate in the fund. As we all must help the underprivileged fellow country men during this time of crisis.#PMImranKhan #Corona pic.twitter.com/86tva3QLij

“The young people will prove that the Prime Minister was right to trust them,” the ministry said. It added that young nurses, paramedical staff and doctors will join the front in the fight against the Corona virus.

Last week, Prime Minister Imran Khan announced the launch of a Youth Force called “Corona Relief Tigers” that will guide the fight against the Corona virus in Pakistan.

During a special briefing to the media, the Prime Minister said, “Recruitment for Corona relief tigers will officially begin on March 31. We are calling on all volunteers.”

Noting that the virus has spread dramatically around the world, the United States has emerged as the center of a new center, the Prime Minister said: “No one can say today what the situation will be like in two weeks. . “

1) Prime Minister @ImranKhanPTI announced the establishment of Corona Relief Tiger Force, constituting of youth. This force will join hands with the government and the army to aid the people of our country amid this pandemic pic.twitter.com/JpfJaQIDOv

“That is why we have to be prepared for the worst situation (in Pakistan) if the number of cases increases,” he said.

Prime Minister Imran said, “That’s why I’m announcing today, we are building a special Youth Force. The preparations are in full swing. We will have a membership campaign with a citizens portal.”

He reminded everyone that “we have the world’s largest population of young people” which is a great source of strength for the nation.

Corona Relief Tigers will be shipped all over Pakistan. We will create a map where matters increase and these lions will be sent to these areas to provide the necessary supplies.